Kottayam has its place of honour in the cultural map of Kerala. The culture of Kottayam is influenced mainly by the large presence of the Syrian Christian community. The cuisine of Kottayam is Keralite Cuisine, characterised by the use of parboiled rice as the staple food and the presence of coconut and spices in abundance. 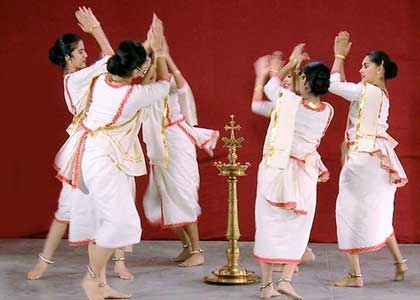 Margamkali and Arjuna Nritham are popular dance forms. Margamkali, which consists of group dance and martial arts like Parichamuttukali, is popular among the Syrian Christian community. It is performed by men and women separately. In the past, it was performed during Syrian Christian weddings. Arjuna Nritham, also known as Mayilpeeli Thookkam, performed by men was also popular. Besides these, popular South India dance forms like Bharatanatyam, Mohiniyattom, and Kuchipudi and classical Carnatic music are also learned by a large number of young people, mainly as a hobby and extracurricular activity.

Kottayam has produced many well known writers,journalists and artists. Muttathu Varkey -novelist and Pala Narayanan Nair -poet have all their footings in Kottayam. Kottayam Pushpanath -writer of crime thrillers lives at Kottayam.

Cricket, basketball and football are among the most popular sports in Kottayam. Kottayam is also famous for athletics, as the place has produced several athletes who represented India. The main stadium of Kottayam is the Nehru stadium at the entrance of the town. A number of popular basketball tournaments including the Marian Trophy, Girideepam Trophy, Lourdes Trophy and Virginia Memorial tournament are conducted every year.

A municipal park is located by Sastri road. There are several movie halls which screen Malayalam, English, Tamil and Hindi movies. There are also restaurants that cater to Kerala, Tamil and North cuisines.